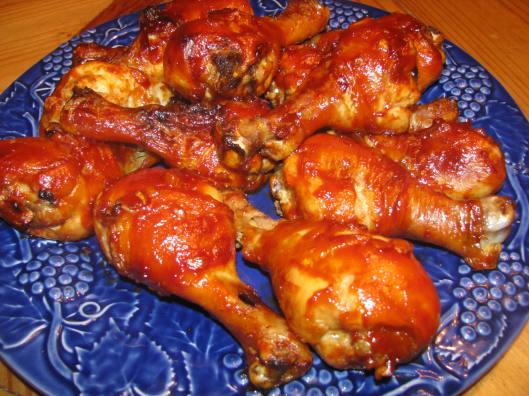 The only chicken MacGyver will eat!

MacGyver, my husband, grew up, on a small farm and on that farm they had some chickens.  EE-I-EE-I-Oh.  When he was about 11 years old, one of his chores was to water the chickens every morning before school.  So that he didn’t have to stand there for a very long time, he “MacGyvered” a way to turn the hose on and leave it running while he finished getting ready for school.  The hose was rigged to enter somewhere on the upper level of the chicken coop, and fresh water would flow through something and rinse and fill the areas that were supposed to be full of water.  I’m not privy to the details of the mechanics of the watering system in such a coop and I did not grow up on a farm or in the woods and he does not like to discuss even the teeniest, tiniest details of this traumatic event at this stage of his life.  Suffice it to say that there is a certain area in the chicken coop that should be full of water and the remaining area should not be full of water.  As with the car incident, you can probably guess where this is going.

One morning, young MacGyver watered the chickens and went to school.  At the end of the school day, when the bus pulled up in front of the house, his father was waiting for him.  He says that this was the only day that he can ever remember his father waiting for him to get off the bus.  Ever.  Ever.  And his father did not look pleased.

It seems that young Mac hooked up his contraption to water the chickens and forgot to go back and turn the hose off before he went to school.  The chicken coop flooded, as in filled to overflowing with water.  No lives were lost.  All chickens escaped, but wet chicken dung and straw and water make a monstrous, malodorous mess.

It happened on a Friday and he spent the entire weekend cleaning out the chicken coop.  As a result of spending the better part of 48 hours inhaling fumes from stinky chicken droppings and sloshing around in it, he became ill with some sort of gastrointestinal bacteria that refused to leave his body and which caused him to have to visit the hospital.  It took him over a month to recover completely, but he never had to water the chickens again.  Ever.  Ever.  After that, it was his brother’s job to do it.  Fortunately, to the best of my knowledge, his brother never forgot to turn the hose off.  But I’m not sure.  I’ll have to ask him.

And that is why MacGyver does not usually eat chicken.  Almost never.  Except when I make his favorite Barbecue Chicken.  Mention “chicken” the next time you see him and watch him flinch.  Just don’t tell him I told you to do that.

I did not have a traumatic chicken experience, so I do cook chicken and the rest of our family eats it.  Mac eats it and makes the best of it, but chicken will never, ever be his favorite meal.  And now you know why.

Do you have a traumatic chicken story?  It might be good therapy for MacGyver to hear other people’s chicken stories.  EE-I-EE-I-Oh!