Three days ago, I had to park on a very steep hill so I applied the parking brake.  I don’t recall ever having to use it before, but this was a really steep hill where, if the car had mysteriously jumped from Park to Neutral, it would have had a running shot to roll backwards, across two lanes of traffic and over an embankment.  I didn’t want to take the chance.

When I returned to the car, I released the parking brake and drove away.  Two days ago when I was driving, I had to pull over because the car was making a noise and it felt like a wheel was falling off.  I got out and looked at all of the wheels.  Everything looked fine but I had concerns about driving any further.  So I called my husband whose knowledge of everything truly amazes me.

Me – “I was driving the car and it started making a funny noise that sounded like the wheel was falling off.”

He – “What sound does a wheel make when it is falling off?”

Me – “Well, it wasn’t as much of a sound as it was a vibration with noise…”

He – “Are you driving with the parking brake on?”  (How does he always know?)

Me – After quickly checking to be sure that it was, in fact, off, I replied, “No, but I used it yesterday.”

He – My version of what he said, “Well, the …. parking brake … line … stuck … blah, blah, blah.”  I have a tendency to tune out when the discussion is about what actually makes the car go.  I only want to know that when I start the car, it will take me where I want to go.

Me – “So, I can still drive it?  Because I was on my way to the grocery store.  You know we go through seven gallons of milk a week and we’re on the last one and…”

He – “It will be fine.  You may find that when you get back on the road, the vibrating will have stopped.  Call me back if you need help.”

So, I pulled out and the vibrating and noise miraculously ceased.  And I didn’t think any more about it until yesterday when I went to the drive-through car wash… 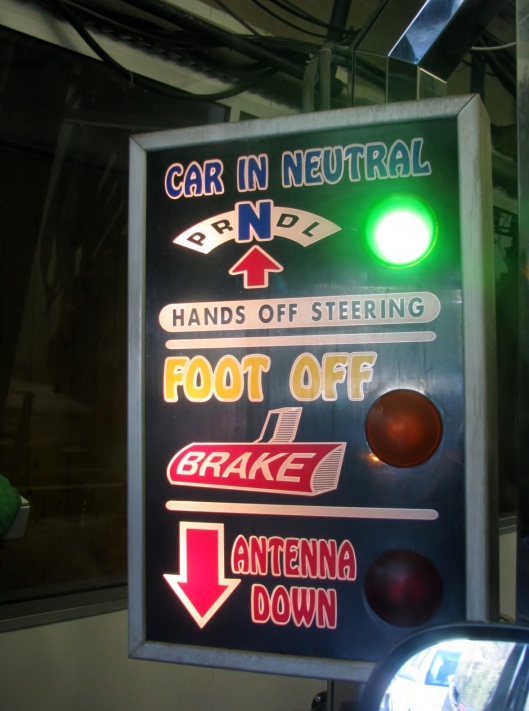 I go to the drive-through car wash regularly so I know the routine.  The sign says, “Car In Neutral, Foot Off Brake.”  Usually I have kids with me and they like to climb in the back of the van and hide, pretending to be attacked by a giant sea squid, but today I was alone.  As the car began to coast through, I took my phone out to check messages.  I felt a little bump.  I didn’t think much of it because the little rollers push the car wheels and it felt like one of those had bumped the tire a little bit.  The problem was, the car should have been moving forward, but because of the squid tentacles and soap suds covering the windows and the fact that I was looking down at my phone, I didn’t notice that it wasn’t moving… at all.

And then it happened again and the bump was really hard this time.  I was rear-ended inside the car wash and I think it was my fault.  I should have been listening when my husband described the issue with the stuck parking brake, because although it was no longer vibrating and making a noise, I think it was still stuck.

I’m not sure who alerted him, but soon there was a car wash attendant knocking on my window.  It was at this point that I noticed that the squid tentacles had stopped moving and and so had my car.  I opened my window and the soap ran in.  He explained that there was a problem and that for some unknown reason, my car had ceased to move forward on the track.

“Did you put your foot on the brake?” he asked.  “No,” I replied, because technically, I had NOT put my foot on the brake.  He asked again.  “Are you sure you didn’t touch the brake pedal?”  As I sat there pondering how to best answer that question without looking like the fool that I was, the kind gentleman driving the car behind me yelled, “NO.  I was watching and there were no brake lights.”  Phew.  I’m so glad he was paying attention or I might have had to tell the car wash attendant my parking brake story, which I am certain he did not really want to hear.  Then I would have had to admit that I was the reason that the car wash had to be stopped and people were getting out of their cars inside the car wash and the line of cars was out the door and around the parking lot.  Embarrassing?  Just a little.

I’m not sure if the parking brake was the issue or if it was some sort of car wash malfunction, (pretty sure it was the parking brake though I can continue to deceive myself into believing otherwise), but I am ever-so-grateful to the man behind me who was watching my back, literally, and who spoke up.  Thank you!

Exiting the Car Wash - Light at the End of the Tunnel

You will be able to spot my car now from outer space in the Google Earth satellite photos.  It will be the one riding along in a cloud of dirt and dust, like Charlie Brown’s friend Pig-Pen, because I will never, ever go to the car wash again.  Ever.  I will ask my husband to go next time.