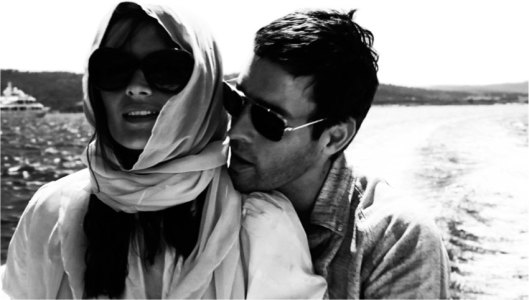 We watched a French movie last week, For Lovers Only.  When I started writing this post, it was last night.  We’ve been so busy, last night is now last week.  This movie thoroughly satisfied my francophilian needs; French language, French clothing style, and French scenery.  For the French influence alone, I would watch this movie again.  But it has so much more to offer.

For Lovers Only is a story of a man and a woman, not falling in love, but rekindling an old love.  They run into each other after being separated for many years, in of all places, Paris.  Travelling by train, boat, car and motorcycle, they run off together for a week, across France, from Normandy to St. Tropez.

The characters are in a relationship that is easy to criticize – they are both married to other people.  The French are much more forgiving of this type of relationship, so whether it is the gorgeous setting or the personalities of their characters, I found myself enjoying their beautiful passion for each other and momentarily ignoring their infidelity.

The final outcome of the affair is left open to interpretation and given a choice, I honestly don’t know how I would choose for the movie to end.  Bits of information about their marriages are revealed, but it’s not enough to judge whether or not they should stay with their spouses.  Of course we all know that ethically and morally and legally they should remain faithful in their marriages, but as an eyewitness to their rare and profound on-screen love, it’s a difficult decision.

The film was shot in two weeks with two filmmakers, two cameras, two actors, and one script.  No lights, no crew, no budget.  The dialogue is limited.  I found myself straining to catch each and every important word.  A small portion of the film is in French with subtitles, but the majority is in English.

The film was shot in black and white.  I thought that might bother me, but I really didn’t miss the color.  The beauty of the setting (France) and of their love, even in black and white, is breathtaking.  The black and white adds an intimacy, as if you are secretly there with them, focused only on the two characters, not distracted by a barrage of colors or any other part of the world that exists outside of their relationship.

The story is written by Mark Polish and directed by his brother, Michael Polish.  Mark Polish is also the leading man in the movie.  The woman is Stana Katic who plays Kate Beckett on the ABC show, Castle.

This movie is “…bare, simple and complicated at times, where every word counts—every moment meaningful—not a breath wasted.”  (ForLoversOnlyMovie.com)

For Lovers Only is available on Netflix and can be downloaded from other sites.  If you watch it, please let me know what you think.

I hope that you like the movie.  J’espère que vous aimez le film.

3 thoughts on “A Movie Review: For Lovers Only – Seulement pour les Amants”